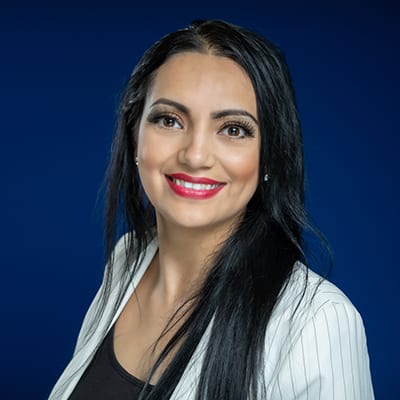 Meet Lori Mendoza, Family Law LLLT (Bilingual-Spanish). Lorena G. Mendoza was born and raised in Eastern Washington. She graduated from Othello High School in 2001. Lori was the firm’s first staff member and has carried us ever since. She attended the paralegal program at Columbia Basin College, receiving her AAS in paralegal studies and AA in general studies. In addition, Lori earned a Bachelor of Art’s Degree in Criminal Justice with a minor in Political Science from Washington State University in 2015.

Lori went on to become a certified paralegal through NALA in 2017. Ms. Mendoza’s scope of practice as a paralegal has included over a decade of assisting attorneys with federal and state cases, family law, criminal law, probate, personal injury, estate planning, and general civil litigation at both the trial and appellate level.

She is a limited legal licensed technician, or LLLT, and volunteers with the legal aid society, providing one-on-one help in family law matters.

The late Gene Schuster, who died in 2006, founded the Legal Aid program. The award given in his name honors volunteers who are earlier in their careers.

Mendoza is a native of Eastern Washington who graduated from Othello High School in 2001. She attended the paralegal program at Columbia Basin College and earned a bachelor’s degree in criminal justice with a minor in political science from Washington State University in 2015.

She became a certified paralegal through NALA in 2017. She was Clearwater Law Group’s first staff member. As an LLLT, she advises and assists people going through divorce, child custody and other family law matters.

She is studying to pursue admission to the state bar as an attorney.

Lorena G. Mendoza is an excellent addition to our arsenal in helping clients achieve the best possible client outcome for the lowest possible price. She in no way replaces our attorneys, but rather augments them, with her Limited License Legal Technicians (LLLT) designation.

Limited License Legal Technicians (LLLT) advise and assist people going through a divorce, child custody and other family law matters in Washington. The LLLT program allows licensed practitioners to consult, advise and support clients in navigating the legal system without having completed a JD. The LLLT role was created to offer affordable options for legal services, particularly in certain practice areas with high demand, and is a great way to be part of increasing accessibility to legal assistance. The first identified high-demand practice area is family law. The LLLT license allows Lori to consult with people on their family law issues, at a lower cost than an attorney would typically charge, and she can give the same type of advice and knowledge you require.

Ms. Mendoza became a Rule 6 Law Clerk in April 2016, and is engaged in a rigorous course of study intended to result in her admission to the Washington State Bar as an attorney.

Lori received the Gene Schuster Award in 2022. This award is given to honor volunteers who participate in the legal aid society, a non-profit that provides volunteer attorney’s to Tri Cities residents who can’t afford to pay legal fees for non criminal cases.

In Lori’s off time she enjoys singing, traveling, camping, spending time with her three adoring children, husband and friends, church, and a variety of church activities. She is a volunteer with the Domestic Violence Services of Benton and Franklin Counties, the Tri-City Union Gospel Mission, and with the St. Patrick’s Church Choir.

Meet With Our Team One on One Today.